I had intended to finish the first crochet slipper sock today whilst waiting for my daughter at her after school activity.  As I had left the house early this morning for work, I was secretly thrilled to have remembered to pack my crochet and some different coloured balls of yarn.  After a long working day and a longer evening ahead, I looked forward to savouring 45 minutes of uninterrupted hooky time.  Ahhh...but I  had forgotten to put in the pattern and as I was about to begin decreasing for the toes, not feeling I could 'go it alone' at this stage, I was scuppered.  But then, laid before me were three crochet books on the table in the room I was sitting, a sneaky look inside soon whetted my appetite and even though I should not have begun yet another project before completing some of the unfinished ones, found myself beginning to chain with the colours that I had in my bag...forty minutes later I had completed the four mini squares required for the front of the glasses case and was crocheting them together when my daughter's class finished.

Several hours later when  the children were in bed and the house was quiet, except for the incessant rain outside, I sat down to crochet some more.  Before I knew it, the glasses case was finished and I had a real sense of achievement, albeit surrounded by a messy kitchen as I has not tidied away after dinner, best go and do that now then!

I chose a bright and fun internal fabric for the glasses case to match the jolly yarn colours. 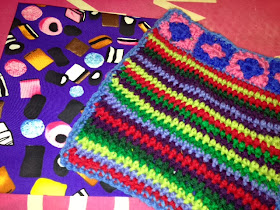 The back view of the glasses case, I really like these colours. 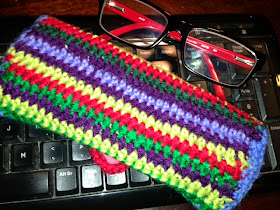 The front view of the glasses case, was dictated by the colours I had with me whilst out and about today! 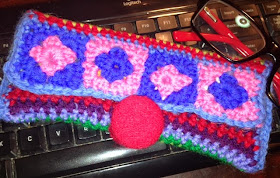 This image shows the internal fabric and how the colours match with the yarn. 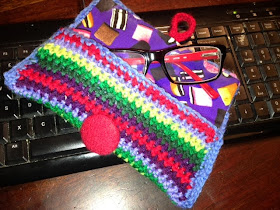 The book that this glasses case came from is called Granny Square Crochet and is by Catherine Hirst.  The book pattern is actually for a clutch bag, so I just adapted it and made it a tad smaller for the glasses case.  What is fantastic for me about this project is that I used only that which I already had, including the large red button from an old coat, you never know when these items may come in handy!  Now I know it is so quick, I am very tempted to make a clutch bag in black and white for a dinner date I have in London in a few weeks... 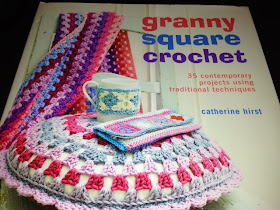 ♥Would love to know what crochet projects or other craft projects are keeping you busy at present!  Are you making for yourself, as I am, or for others?♥﻿
eclectichomelife
Share