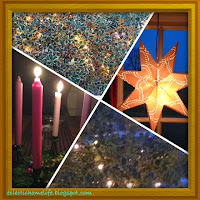 Sitting at the desk in the study whilst everyone is asleep, I still put on the twinkly outdoor lights, so a little of their magic seeps in through the French door window and makes me feel just that little bit extra cosy and excited.  This morning the sky is that deep dark blue before the whole world wakes up and through the winter bare branched trees I can see am almost full moon effusing out its yellowy warm glow.  All feels calm and good with the world as I sit here in my little cocoon, not thinking of the reality of the world around me.  I think that is part of the charm of December, it is a time where you can try and forget all the rumble and grumble of life for a few magical minutes and it is these that I savour.


﻿﻿﻿﻿﻿
Today we are still in the kitchen and we make a very special and very traditional cake:  kransekake.  Both my father and Uncle, (not Norwegian,) just LOVE this cake and ask for it to be made just whenever, there is a standing joke that my Uncle always asks who has made the kransekake, mamma or I, as he prefers hers!!!!  Just to let you know Uncle K, mamma has made it this year! I was taking the photos!

What is a kransekake?  A direct translation would give it the name of 'wreath cake', but even calling it a cake does not really describe it accurately.  I know of nothing to liken it to and a poor attempt would be a cross between an almond meringue, baked marzipan with a much lighter texture, but none of this is really true or correct.  You will just have to take my word for it, and hopefully have a go at making it, that it is unique and tasty.  If you have a sweet tooth and are OK with almonds, try this out!

A kransekake is made up of 18 individual rings that are laid on top of each other to form a circular tower.  This cake is made for any celebration and features at most weddings, christenings, confirmations, birthdays, Christmas' and any other celebration that you can think of.  The beauty of this cake, other than looking stunning on a table,  is that people come up and serve themselves, making this for an English Christmas ideal for a Boxing Day buffet. 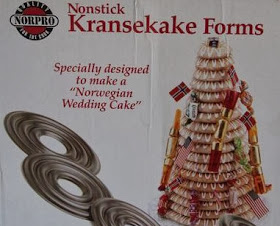 No one really knows how the kransekae came about or indeed why it is so popular, but one story that is doing the rounds states that it all began in Greece.  The kransekake as we know it derives form a similar cake called overflødighetshorn, (horn of plenty) as it is basically a kranskake made out of rings but laid on its side to form a hollow horn and filled with chocolate and sweets.  So why Greece, well Crete actually.  The myth has it that the nymph Amalthea, raised Zeus (the God) in a cave and fed him goat milk. As thanks, she received the horn of abundance from Zeus where all her wishes came true.  A horn was chosen, as the symbol from the goat horn, from the animal that had given Zeus his milk.  From this time on the 'horn of plenty' was born and became a symbol of abundance, fruitfulness and fertility around the world.    From historical references and paintings it would appear that the horn of plenty, otherwise known as, cornucopia, first started to make its appearance as food around the mid 1700s. And it was here that the kranskake has its origins.  Whatever the true story, the appearance of this cake in Norway and Denmark too is wide spread. 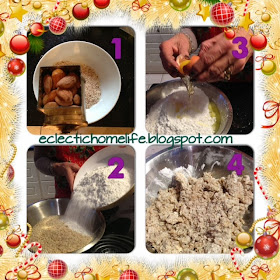 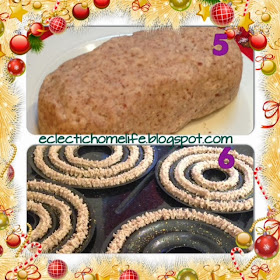 5.  Form the dough mixture into a rough  sausage
shape.
6.  For those with the both the metal
piping equipment and round tins, you need
to first melt the butter and then with a brush
grease each of the moulds.  Finally spraying a
thin layer of breadcrumbs on the tins.  This
stops the mixture from sticking to the tins and
allows you to remove them, hopefully,
without breaking them!
Add the mixture into the piper quickly and
smoothly fill each mould, being careful to
ensure the mixture touches and joins to form
a complete ring.  For those of you who do
not have this equipment you have two
choices:  a) roll out individual sausages of
about 1-1.5 cm in diameter and place on a
baking sheet with greaseproof paper.  The
mix will not swell so you can place these sausage 'sticks' fairly tightly on the sheet.  There
should be enough mix to make about 40 lengths of a baking sheet.  The second option is long
winded  b)  make free-form rings, rolling the dough into sausages, make the smallest first to
guide ring size progression. Make sure the rings overlap in size so they can rest on each other
creating a pyramid shape when baked and cooled.
7.  Bake in the oven at 170C for about 10 mins, but check as you do not want them to burn.  Cool
on rack.
8.  At this point you have two options a) freeze the cake until you need it, as this will make it
lovely and chewy, so can make it some days in advance, or b) assemble it.
9.  To assemble place largest ring on the plate and stack each ring on top.  You can use an aquavit
bottle inside the rings and build them up around it, to ensure they do not topple over.  If you do
not have aquavit, any medium spirit or wine bottle will do! 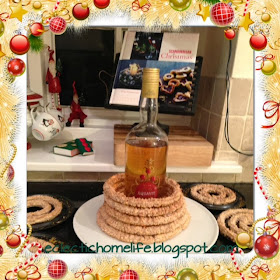 10.    Once assembled it is customary to ice each ring in a curved zig zag pattern and to add mini
crackers, flags, Twist (Norwegian equivalent of Quality street) to jazz up and give the cake a
feeling of abundance.  My cake below has not had the icing treatment, as it is still several days
before I want to use it.  I will ice it on the day, or perhaps the night before.
11.    A great tip/trick to make sure the cake becomes soft and chewy on the inside is to add fresh
white bread all around the outside of the cake and inside it too.  Cover it with a couple of plastic
bags until ready to serve.  But remember to take the bread away, the number of times I have
taken the bread away from the outside, but have left it inside in the hollow of the cake are too
many to think about.  Doesn't look good, don't do it!  Best to leave the bread with the cake for
24 hours if you can.


To serve, place the kransekake, in a place where everyone can reach it and you lift it carefully up and take from the bottom rings, breaking them up and taking what you desire.  This cake never lasts long as it is so moorish.  For those who are making it with just the sticks of kransekake a modern twist is to melt chocolate and dip them in, Norway's version of a Spanish churro! 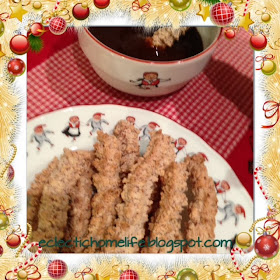 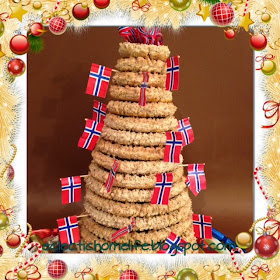 ♥It may seem like a phaff, but this cake is so delicious, it really should be made and tried.  And actually...it is not a phaff, just something very Norwegian and unique!♥﻿