Every year around November time I curse myself for not thinking about making Christmas decorations earlier and I say to myself, next year I will let the dust settle from all the celebrations and I will begin around February, and what happens, November is suddenly upon us, I swear this happens every year, does any one else have this problem?

This does not mean I am not crafting or dabbling on this or that, I am constantly starting a project and not always finishing it! One of my aims of this blog is to force my hand into finishing that which I begin, fingers crossed x

What have I been doing this year and when do I get time to craft in an ever busy world?  It is a good question and I try whenever I can to craft, but in reality, something has to give.  So for a while, it could be housework, or reading in bed at night, it can happen when I do not have much paid work on, but mostly it occurs during holidays and none more so than the summer holidays.

Each summer the children and I will de camp to mamma's in Norway and each year I look forward to the craft that I will become immersed in.  Many years the children will join in and we have had a dabble at, felt making, decoupage, paper cutting, stone painting, hama beading and lots more; they did not join in the year I was into knitting, but then they were rather small and neither did they join in this year, when my obsession with crocheting took over.

For a few months leading up to the summer I became a member of an online local craft group and was inspired no end by the beautiful creations these women made, many of which were knitted or crocheted.  After some months I braved it and posted on my new found love (back then) of free hand machine embroidery.  Just google Poppy Treffrey and you will see how amazing it is:   http://www.poppytreffry.co.uk/   The response from the group of my sewn projects was so encouraging that I decided in the summer at mamma's where she could guide me if needed (she is brilliant at both knitting and crocheting) that I would begin my foray into the world of yarn again.

This yarn obsession is carrying on for a long time and I LOVE IT!  Through the online craft group I heard of a crochet queen here in England called Lucy, have you met her yet?  NO?  Well then you are in for a treat full of colour, I urge you to go and visit her blog:

My first attempt at crocheting ended up being this massive bag project, it was so easy to do and literally, pardon the pun made me 'hooked.'  I will post about this in the New Year.  Having begun to follow Lucy, it was in early November that she posted about a Christmas crocheted wreath, that I knew I had found this years Christmas decoration and so the 'hooking' began in earnest.  To see Lucy's multicoloured version and tutorial see the below link: 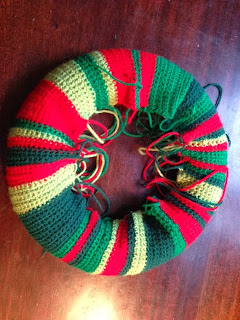 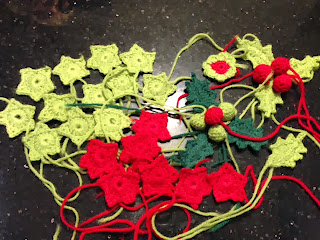 I decided however despite loving her colours enormously, that I needed to be more traditional in colour to fit in with the rest of the house at Christmas time, but I am hankering now to make another and in much bolder colours, yes, another wish list project in the pipeline! 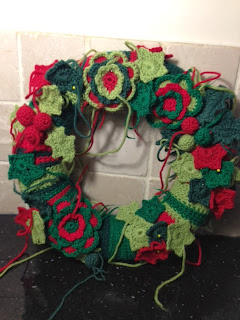 I sent the link through first to a friend of mine as I thought she would fall in love with the colours.  I was right, she did, and began making hers straight away.  Several days later and seeing my friends background of the wreath complete I could not hold off any longer and needed to begin.  I began making the small pieces for the wreath first as I had to order the polystyrene wreath and enjoyed these tiny quick creations, just my thing, quick, simple and each one done in literally minutes, perfect for me!  The pieces included, holly, stars, balls and flowers.  Mamma was over visiting at the time and she too became interested and has begun and finished hers.  My friend and I began sending each other photos of how far we had hooked and this was really motivating to me.  Never underestimate the power of companionship and togetherness, it really spurs you on, I may have started my friend on this project, but she really helped me to move forward, thank you ♥ 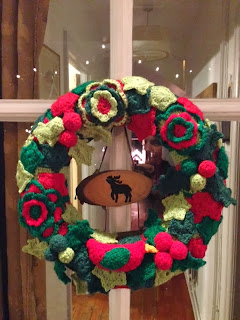 I still need to 'finish' the wreath, the poor little bird has no eyes and I think a little bit of 'bling' on it might be the order of the day, so perhaps during the coming days, a little more may be done to finish this Christmas wreath off completely.  Making your own door wreath is fun, however you make it and with whatever materials you can lay your hands on.  If you have a little time, why not make your own wreath, from collecting a few bits of holly and chopped off Christmas tree branches and using a wired coat hanger as the base, you can make the most amazing wreath, for very little money, a small amount of time and let your inner creativity out!  Just a thought...


Have a great Monday everyone!
Posted by eclectichomelife