From Russia with love (Part 1)


My husband and I took a sneaky four day trip with friends to St Petersburg earlier this month.  Somewhere I have wanted to visit since A level history days, a few decades ago now...

I was not to be disappointed and in fact wish to return. On arriving at the hotel, we were all upgraded to suites and the week end just went from strength to strength, along with my tolerance for huge quantities of vodka!

So why St Petersburg, well our good friend decided to research and see what we should pop over there and find for ourselves, his top 10, not Lonely Planets was...


I think this set the tone for the city break well! We managed all (to a greater or lesser extent) bar number 5.

Procuring the Russian visa was a story in itself and cost a fortune, I admit to glowing profusely at arrivals and passport control.  All was very serious and as I had previously been in Russia at the end of the cold war without a visa and was detained for two days (don't ask) , I was worried they would remember me; thankfully I was allowed in and the Russian hospitality knew no bounds.  Without exception everyone was warm and welcoming.


St Petersburg was founded by Peter the Great in 1703 who was out searching for a new spot to build a city when it is said he saw an eagle soaring up ahead whilst boating on the Neva Delta, which was seen as a good omen and so began building.  Having been to Europe he was keen to build himself a majestic city and so the foundations of St Petersburg began with the famous Peter Paul fortress built on an island in the river.  This was a brilliant strategic place as it allowed blocking of the entrance to incoming enemies. 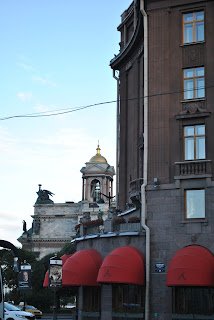 St Petersburg is a much larger version of Venice, it has canals and rivers running all across it and you are never more than a few feet from water.  The buildings are vast and majestic and there is a definite feeling of pride here both imagined from years gone by and now as still a show case for Russia.

We stayed at the Astoria hotel, in itself a historic building having played a part and witnessed much of the last 100 years history of Russia.  Opened on 23rd December 1912 it quickly became the place to be seen and socialise.  The Tsar and his family dined here and Rasputin brought his married lovers here.    Two years later in 1914, St Petersburg was renamed Petrograd and by 1917 the Russian revolution began with much blood spilled on the square in front of the hotel.  In 1929, the city was once again renamed to Leningrad and indeed Lenin himself gave a speech from the balcony of the hotel to his trusted supporters below in the square.

Between 1941-43 the city was besieged by the Germans and the hotel became a hospital.

As recently as 1991 the hotel was amidst the failed coup against Gorbachev but it has now been restored to its former glory and has welcomed many minor and major celebrities through it's doors...


Our first stop was to the largest orthodox basilica in the world and the fourth largest cathedral in the world; that of St Issac, named as such as he was the patron saint to Peter the Great who was born on the feast day of St Isaac.


Climbing the 250 plus step in a spiral to the colonnade at the top so we could walk around the drum of the dome was quite a puff but so worthwhile.  I quickly dashed off from the others in the pretense to take photos when indeed I really needed to get my breath back, but what a 360 degree view.  The blue skies and sun shining on all the gold domes and spires of St Petersburg made the city bright and light and magical.  The photos as often is the case just do not do it justice. 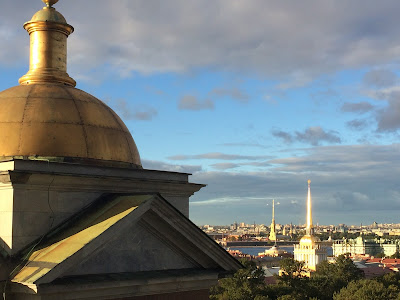 Inside, St Isaac's was built to allow up to 14,000 worshipers to stand, as with all the buildings in St Petersburg we were to learn that everything was huge.  They do not know how to do things on a small scale.  Sadly the architect died just 24 days before final completion of the cathedral and despite his wish to be buried here was not allowed as he was not himself Orthodox.  Being of French origin he was taken back to France to be buried. Finally in 1858 on  the anniversary of the death of Peter the Great, St Isaac's was opened to the world. 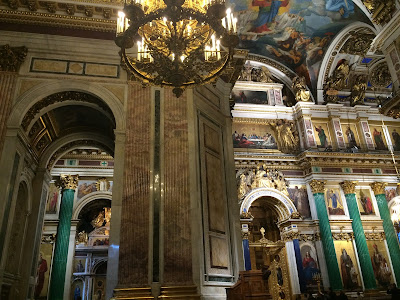 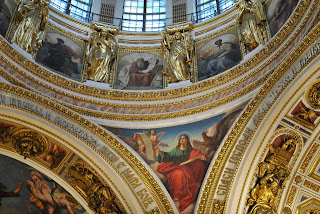 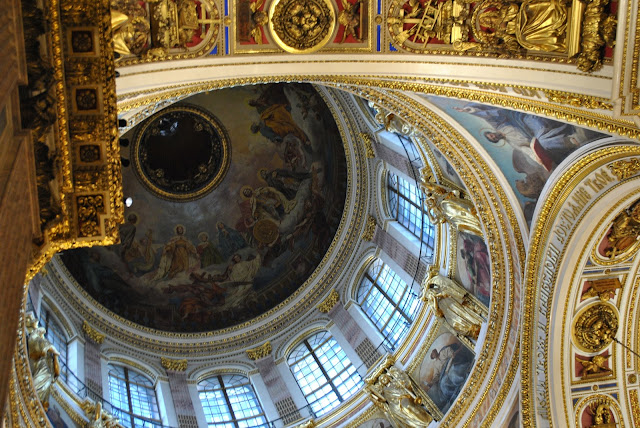 We ended the day back at the hotel for a Russian dinner where we were able to tick off a few more on our list...


Having arrived early afternoon to St Petersburg, we felt we had accomplished a lot on the first day...
Posted by eclectichomelife 24 comments:

Waking up to the loudest thunder crack at 3 am does nothing for my beauty sleep nor my poor old
ticker.  It took some minutes before I realised that it was just a rain storm passing through and took even longer for my heart to completely calm down.  But wow what a storm, it is still raging now and our wonderful local fire brigade are out there trying to clear the drains and stop our properties from flooding.  Driving John to the station this morning took Olympic driving skills, wishing I had a car I could raise by a couple of feet too. Hope everyone is OK out here in our neck of the woods.  Did you know you can track where lighting strikes, quite fascinating.  You can zoom in on the map and see local to you, but here I show the entire UK map for lightening strikes between the hours of 3-6 am, just look!!


To have a look at the site yourself click Lightening maps

It's unbelievable really when you think how wonderful the last few days have been, almost Mediterranean, as I walked out of the supermarket last night a wall of warmth enveloped me and I love it.  I suppose thunderstorms after heat like that are very Tuscan.  Did you see the red sun setting last night?  It was truly glorious and of course my photos did not do it justice but another weatherman I follow on Facebook snapped a great shot yesterday at Oxford station, just look at the colour of the sky, no photo editing here, promise, it just did not need it...

Life has been continually hectic here in this eclectic home and all of my own doing, my feet have not touched the ground and I could actually really rather do without this rain today as I have a garden party tomorrow for 25 celebrating pappa's 80th, wish me luck with the weather.  As is always the case for family celebration a kransekake has to be made.  It's made and the icing is done just the final decorations need to be added later today but so far it look like this:

To find out what this cake is and how to make it follow the link:  Kransekake

I have been travelling again, I knew the travel itch was still scratching so we had a sneaky 4 days away last week in Russia.  It was truly amazing and I was blown away by the architecture, the history and the warmth of the Russian people, sneak peak at a couple of photos ahead of a Russian post...

And let's not forget a crafting girl has to travel with her crochet after all and in the spirit (see what I did there!) of travelling to Russia had to partake of some vodka! 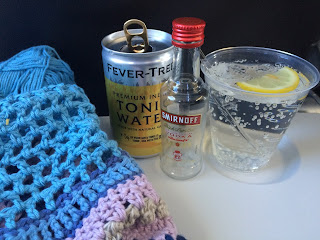 Hope you have enjoyed my 5 for today, I look forward to popping along through out the week and reading all your posts too, forgive me if it takes a while I have a party to plan and cater for and then to recover from!  Joining in with the lovely Amy ...


Edit:  Just received these photos of the local train station: 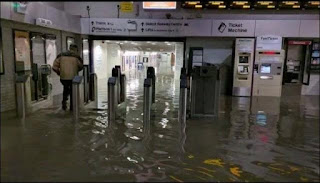 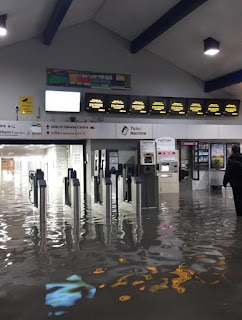 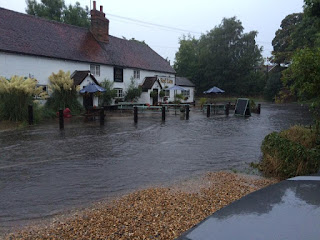 For the past 15 years we have hosted a small friends and family regatta on our stretch of the
Thames.  It's a hands on weekend for everyone involved and everyone from the youngest to the oldest takes ownership and is involved in either food prep, organising, running the event, entertainment, tidying up, safety, communications etc, you name it and someone within the group has to do it.  The week end belongs to everyone and although it takes place at our home, it is not our regatta but every ones.  It is one of my favourite if not 'the' favourite weekend of my year.  It has to be said not all take part in the water activities, but there is so much going on over the weekend that there is something for everyone.  Long may this regatta continue and I hope the younger generation continue it, it's looking good so far...

It all begins with the invite.  Last year saw the first video invite and we decided to carry on with it again this year...

We chat till the wee hours in the morning when someone else is giving the task of cooking breakfast for the masses before everyone departs for another year... 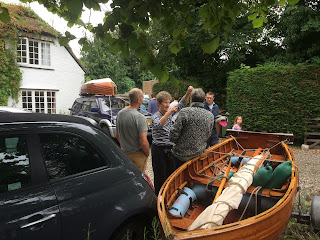