When two families join together through marriage or partnership, you never really know who you are getting involved with when it comes to THEIR family, do you?  I have been married now for nearly twenty years and so have finally got a bit of an idea what HIS family are like and...they are OK ;)  In truth, they are more than OK and we get on great.  In fact mamma and my aunt hit it off with the M-I-L so well that I decided I should do something about it!  What did I do?  Well nothing immediately, but about a year or so into my marriage and none of these good women had been in touch apart from the obligatory Christmas card sending, that I decided to bring them together at my house for a lunch in early December.  Nobody lived particularly close, some an hour away and others almost three hours away.  Those who lived the furthest away were invited to stay the night and mamma and Auntie F were to drive back home.
I remember clearly the lunch, the house I lived in then, although in England had a very distinct open plan Scandi feel to it and as I laid the table for lunch, trying to get the 'I haven't gone to too much trouble planning this look', but actually planned it thoroughly, I was a little apprehensive to how everyone would really get along and how the conversation would flow.  We were to be eight for lunch, mamma with her two daughters, Auntie F with her three daughters and M-I-L with her daughter.  Need I have worried?  No.  The conversation flowed, the laughter was loud and the atmosphere distinctly warm and friendly.  The lunch lasted much longer than anticipated and those who had to drive home were reluctant to.  Mr H arrived from work to a full house, we had thought he would not, and this was the beginning of a new family tradition.  A family 'Ladies Christmas Lunch' was born.

Most years we manage to have our 'Lunch' around the end of November or beginning of December and over the years one or two of us have had to miss it for different reasons, usually and I think only when they have been out of the country, otherwise we have a strong bond to attend and have fun.  Since we began this almost twenty years ago, two of the 'ladies' now live abroad and a third is about to do so next month, but such is the pull of this lunch that more often or not, they return 'home' to attend.  This year we are a full house and to ensure this was the case, the lunch is being hosted today by my cousin on the south coast, who knows when we may be a full house again.  We have grown in numbers with new additions to the family and this year we will be eleven ladies, the youngest being three.

As you can imagine food plays a central role, along with some cocktails and the lunch has now become a ladies 'sleepover', so instead of being a four hour stint, the whole week end needs to be set aside!  The concept has grown and evolved over the years and it has been lovely to watch everyone add to it.  Some years we have had 'guest' ladies which has added its own fruitiness.  To ensure everyone is involved we take it in turns to host, the host being responsible for the food and everyone else bringing the drink.  At some point over the years, a Secret Santa was introduced and this year for the first time, we have a theme to the presents.  We will be by the coast for lunch this year and so all presents need to be on a seaside theme. 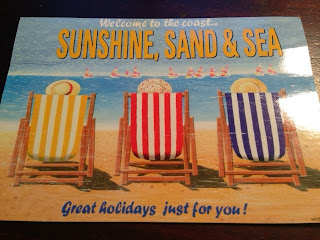 You can see the invite that arrived for this years festivities has set the scene well.  Nice one, cousin!  I like the touch.


This lunch has become another tradition that we have in this family and one that we all really love.  The men of the family after some years of this tradition, felt that they should have their own thing, which 'excluded' the women.  So if I remember correctly three times over the years they have got together and had full on activity week ends, all very successful, but they do not seem to be as organised as we are!  This is our 15th year! 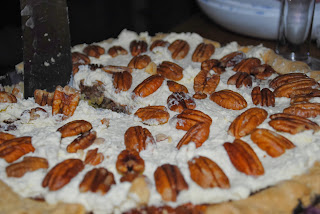 Three times we have travelled to Norway for the Ladies Lunch and twice it has coincided with the beginning of Advent, so we were all able to sing and dance around the town Christmas tree with all the other Scandi's and take part in a Norwegian tradition.  This time of year is all about keeping some of the old traditions alive and creating new ones to take us forward.  Last year as I mentioned, we were in Norway at mamma's for the lunch, a great time was had by all.  However the sink became blocked and we were left with a mound of washing up as we did not dare use the dishwasher either.  We do eat and drink rather a lot.  Here's hoping to this year, and my cousin hosting her very own first Ladies Lunch that it is hiccup free and if not...we will still have a fantastic time because we are all together. 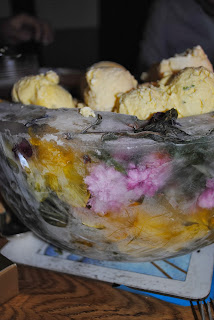 Ice bowl made by my S-I-L


♥I love traditions that can evolve and move with the times!♥ 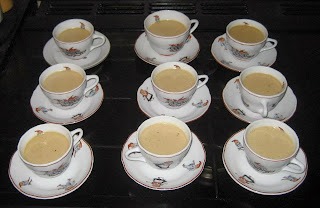 Email ThisBlogThis!Share to TwitterShare to FacebookShare to Pinterest
Labels: Christmas