Christmas would not be Christmas in our home without the familiar smells of cinnamon, cardamon, ginger and vanilla, they go hand in hand with the month of December for us.  As is the tradition in
Norway over the following weeks we will bake seven different biscuits or cookies whichever you prefer to call them and will be willing friends and neighbours to pop in to share some with us.  Let's not forget this is the season to be giving and being together.  Let's try to cut out as much commercialism as we can and strip right back to the meaning of belonging and being with friends and family.

As always and no apologies here, the first of our bakes has to be Pepperkake.  Each country seems to have its own version, call them Ginger biscuits in Great Britain,  Pfeffernüsse in Germany or Kruidnoten in Holland to name but a few.  This warming spice adds a real reminiscent smell and flavour to many, here I am hoping to persuade you to come over to the Norwegian side and sample our version of the humble Christmas ginger biscuit.  Biased I may be, but I think it has an extra warmth and flavour to it, very subtly stronger in spice than the British biscuit and not as overpowering as the German, make some for yourself and let me know what you think.  I have a dear friend who emigrated from the UK to Australia many years ago now, who would not be without making her pepperkake each year.  It warms my heart as she sends me a photograph every year of her baking a batch of pepperkake. 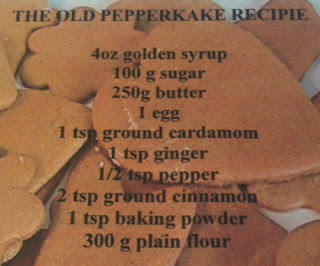 NOTE 1:  It is really imperative to put the DOUGH MIXTURE into the fridge overnight, therefore MAKE IT THE DAY BEFORE you need to bake the biscuits.


NOTE 2:  This mixture also freezes very well, so you could freeze half the dough if you so wished.  I never do, as the biscuits keep well in an airtight container and actually I tend to have to make a second or third batch during this Advent season.

They seem to be so popular that the children take them in tins to school.  In fact, my son has already asked to take in 60 today to school so everyone can have 2 each!  Luckily I tend to get between 70-80 pepperkake from each batch but it means a second batch will have to be made very soon!


NOTE 3:  The dough mixture softens quickly once out of the fridge, it may seem hard to get out of the bowl, but this will soon change, so handle it as little as possible and put back into the fridge that which you are not immediately using.  Roll out to normal biscuit depth and cut with seasonal shapes.  I tend to stick with the traditional heart shape, this too is very Norwegian and all shop bought Pepperkake will be this shape.  We keep ours plain with no icing, but many now add white icing outlines to the outer edge of the cookies, less is more in this instance I think!

♥  Melt on a low heat, the syrup, sugar and butter.

♥  Sift the flour, baking powder and spice and mix well.At this stage the dough is quite gloopy, I tend to leave it in the pan and then place it in the fridge overnight, but you can transfer to a smaller bowl if you so wished.♥  The next day take out only a small amount of dough (see note 3) and roll out on a floured surface to about 3-4 mm thick and cut out shapes placing cookies on a greaseproof lined baking tray.  this is important.♥  Bake at 175 degrees for approximately 10 minutes, or as in my fast oven less, until just golden brown.♥  Cool on a wire rack before either icing or placing in an airtight container.  These will last for 2-3 weeks.

Pepperkake ready to take to school on December 1st...

♥  It's the beginning of December, happy baking to you all!
Posted by eclectichomelife