Two very famous and now 'trendy' knitters in Norway are men. Nothing new there, we have our very own Kaffe Fassett.  By the way, did any one pop along to his fabulous 'A Life in Colour' Exhibition in the Autumn at the Fashion and textile museum in London? It was a true wonder of colour and a feast for the eyes. Will make a note to write a post on that in the new year, a real treat it was. Any way I digress, other than to say, men can be and often are brilliant at what is commonly thought of as womens' crafts. The two Norwegian men in question? Arne and Carlos of course, no need for second names, they are that famous in the world of knitting.

Arne began to knit when he was four years old and as expected, was taught by his Bestemor (grandmother). He and Carlos joined forces with the Japanese brand Comme des Garcons in 2008 and brought traditional Scandinavian knitting into the world of fashion, making it trendy again. It was from here that their popularity grew and they suddenly 'exploded' onto the knitting scene.   In 2010 they produced a book that has single handledly created more Christmas decorations to be hand made in Norway, I suspect, than anything else; they published, Julekuglar, now also thank fully in English and known as,  55 Christmas Balls to Knit.﻿﻿ For those of you who have not come across this, they have devised a knitted bauble pattern and have used both traditional and contemporary patterns to decorate these with. So many people have now knitted these, that some have nothing but these knitted baubles on their trees, others have just one or two hanging somewhere in the house.  They are fun and fiddly to make.  You knit these on double pointed needles, a trick in itself, but once you manage one, they are fairly quick and addictive. As Carlos himself says of knitting, it is the, "most addictive of the different crafts," and he may be right. 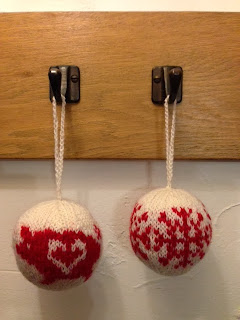 Above are two of the 55 designs that can be found in the book. The traditional 'Julegris', Christmas pig, always found in Norway in the shops made out of marzipan. As with any craft, watching the patterns grow and see how they will turn out is great fun, give it a try!

The demand and popularity of these Christmas balls, meant that Arne and Carlos were also in demand for magazine interviews and people just wanted to know as much about them as they could.  They themselves see their 'buisness' as selling a life style to the public as well as knitting.  The two of them live on an old farm, raise chickens, are trying to renovate a very old house and create a huge landscaped garden based on English designs.  As they say, for them the bigger the project the better. However, when it comes to knitting, the reason they believe the Christmas balls have taken off, is because they are relatively quick to make, unlike jumpers for example.

So, the Norwegians demanded more from Arne and Carlos and they next produced an Advent calender of Christmas balls, this was an actual calender count down in the month of December, with a new ball pattern for each day, how fantastic an idea is that? 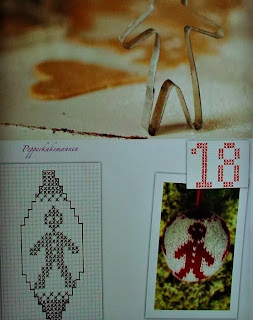 But the Norwegians did not stop there and demanded more from Arne and Carlos, so they eventually produced a book on Easter balls too... 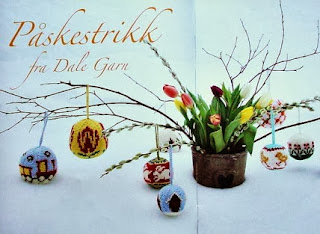 In Norway, many decorations are hung from branches and twigs, I will in a few days show you how I decorate my dining room with lots and lots of tiny knitted 'nisse'.  But in the mean time, below are three of the knitted Christmas balls on the holly tree outside my house. 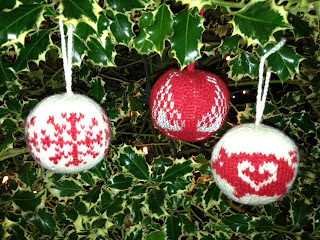 This you tube clip, is from Finland and is an interview with both Arne and Carlos, talking about their Christmas 'balls'!!

Knitted balls
The below link is to an American site where lots of people have posted photographs of their own versions of the Christmas balls.  Both chaps agree that their book is for people to directly copy and use the patterns, but also as a book of inspiration for everyone to have a go at designing their own patterns to be shown on the balls.  Are you up for the challenge?  Have a go, make their balls and then design your own.
https://www.facebook.com/#!/pages/Trafalgar-Square-Knitting-and-Weaving-Books/292785458494


For those that want to have a try before buying their book, a similar free pattern can be found here:
http://www.letsknit.co.uk/free-knitting-patterns/comfort_joy_tidings/

Crochet balls
I have not forgotten the crocheters amongst you.   Lucy, yes, I mention her often at Attic 24, has created some quite small balls that could be made in abundance to decorate a tree, could look very fetching and am tempted by this myself.  These balls are incredibly quick to hook up, probably less than 15 minutes each, you can make hundreds very quickly indeed.  As always her photo tutorials are very easy to follow.
http://attic24.typepad.com/weblog/2012/12/little-balls.html

For larger crocheted balls, you could do no worse than try this pattern. I googled it today, had a quick hook up of it and found it quick and easy, one ball made in about half an hour.
http://6ichthusfish.typepad.com/6ichthusfish/2009/11/free-crochet-pattern-for-christmas-tree-baubles.html

Finally a note on Arne and Carlos, they are still designing and have just produced another book which is a feast for the eyes, perfect projects to begin in the new year, ready for spring time and spending lazy days in the garden, a sneak peak... (just look at the blanket bottom left!) 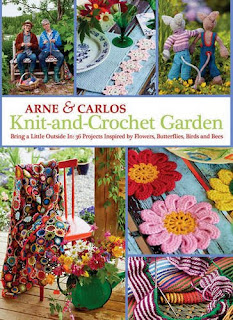 Have a great Monday everyone!﻿