Sunday was such a lovely day after all the horrendous rain we have had, that it was a pleasure to look out of the bedroom window on awakening.  Made doubly so by the beautiful sight that greeted me as I finally arose from bed, having had an unusual lie in without having any children's sports chauffeuring to do.

There on the bedroom floor was a rainbow...

﻿﻿Sometimes you just know when a day is going to pan out well and this was one of those days.  My
sister had asked me to stop crocheting hearts via my
facebook page, https://www.facebook.com/eclectichomelife and so with Valentines day finished for another year, I thought I had better respond quickly.  She had asked for wrist warmers as she was finding the daily commute on the Metro cold and really fancied a neutral coloured set to keep her toasty warm.  So what does an older sister do but oblige:
﻿


I chained 30 and triple crocheted (UK term) in the round, slip stitched in at the end of each round then chained two before continuing to triple crochet the new row.   I continued until each wrist warmer was approx 7 cm long.

As I was using stashed scrap yarn (sorry sis) it was not the softest of wools, decided it needed something more snug on the inside and found some old striped towelling material that would do just the job.

I measured the towelling material to fit around the inside of the wrist warmer and then machine sewed it into a continuous loop. 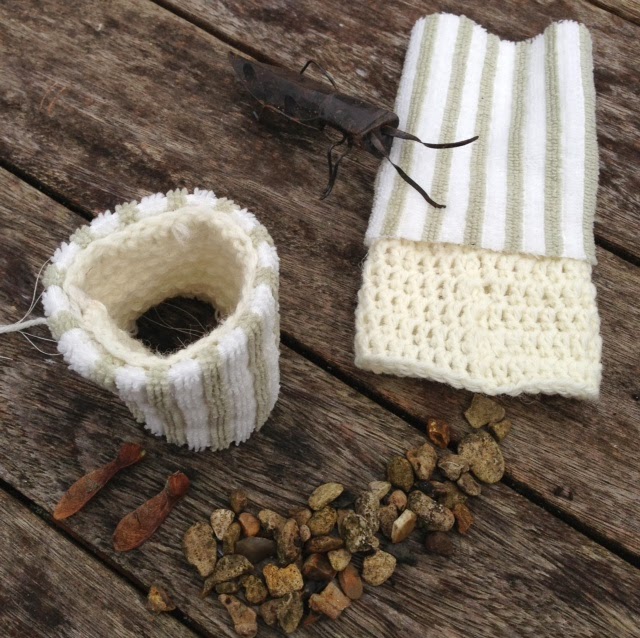 I did not like the end finish so then decided to scallop edge the wrist warmers.  Using the same neutral coloured yarn, I joined at any point and followed the pattern of :  dc, htr, trc, htr, dc, ss and repeated this until I had crocheted all the way round the wrist warmer.  This was repeated on all four edges to produce a softer line to the finished project. 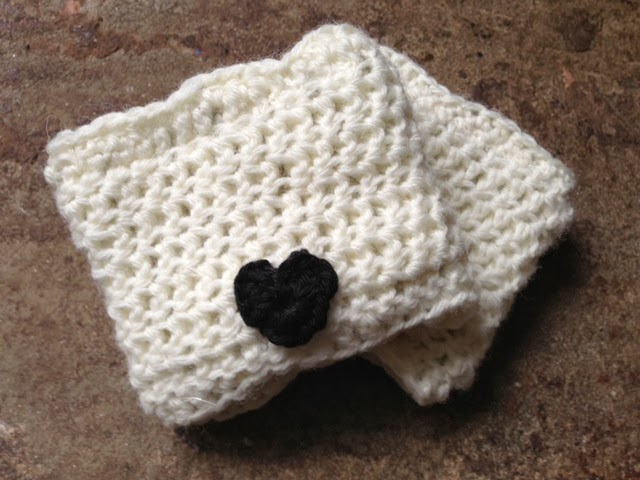 I had already made a very small black heart, see previous post, (for this any many more crocheted hearts : http://eclectichomelife.blogspot.co.uk/2014/02/valentines-and-crafting.html  ) and sewed this on just one of the wrist warmers and posted them off to my sister, hoping that they arrive quickly and keep her warm knowing I love and miss her.


But it was to be a very productive day, my daughter concerned for her father, decided to make him his current favourite; flap jacks.  Not being one for doing anything by halves, she looked at a recipe and immediately adapted it to suit her father's taste.  This is what she did: 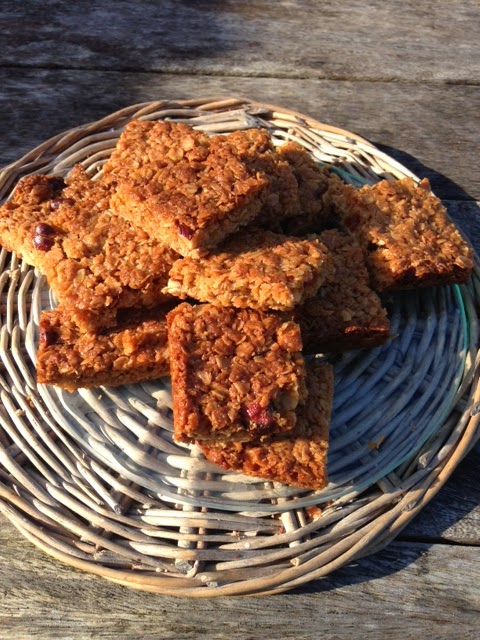 ♥  Preheat the oven to 190C/375F/GM5
♥  Grease or line a small tin, approx 20 cm
♥  Melt butter in a large heavy based pan and stir in sugar   and syrup.
♥  Add oats, ginger, hazelnuts, cherries and apricots and mix well.
♥  Press mixture evenly into tin, best to use the back of a metal spoon to produce an even level finish.
♥  Bake for 15-20 mins until golden brown.
♥  Cool in tin for approx 10-15 mins, then cut into wedges, slices or squares, according to preference

Eat and enjoy!
Do you have any favourite flapjack recipes you would be willing to share?