Today is Norwegian Constitutional Day, the day Norway became independent and began with their own royal family in 1814.

It's a national holiday and parades through out each town and village across the whole country takes place today.  From early morning brass bands march and celebrational breakfasts are eaten.  Norwegians party all day long with friends and family.


One of the 'must' have on the food list is the celebration cake known as kransekake, I have written about it several times before but it is so special, I thought you would not mind indulging me again this year.

Kransekake
You will need:
500g almonds with skin on , you can bought ready ground
500g icing sugar
3-4 egg whites
butter for melting
semolina or fine breadcrumbs
icing sugar for decoration

I must confess to not creating the perfect kransekake this year, I was too impatient this morning, having meant to make it last night but was not feeling well.  I awoke early this morning to make it.  Taking it out of the oven too early and stacking it before it had cooled properly it began to collapse with the weight of the top rings once I had turned my back on it.  So how to save the day... I simply removed the lower rings, iced them as normal and just laid them around the edge of the now much shorter kransekake.  Do you think anyone will notice?

After having baked the kransekake, I tuned in on live streaming and watched a little of the children's parade in Oslo and saw the royal family waving from their palace balcony, I may not be in Norway but I can still join, the wonders of the internet.


Each area of Norway has it's own traditional dress and you can place people by the costume they wear, mine comes from Vest Telemark, where I hail from, I love it and am very proud of it.  It is hand embroidered and was made to measure for me in 1988.  When bought for a young girl it is made with excess material to accommodate the ever changing shape of a woman... (thank goodness) 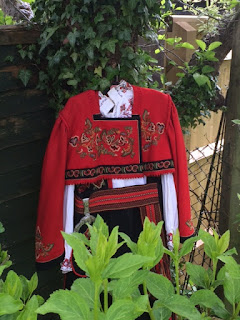