Dancing in the rain

A creative being... what a lovely phrase and one that many of us who follow crochet blogs will be familiar with, it is the name of the very popular blog that used to be written by Marinke, or as she preferred to be called Wink.  Wink was a source of inspiration and was always happy to communicate and talk about all things creative but especially crochet.  She also suffered from depression.  Her last post on her blog back in June explained to us all that she was in a very dark place and that crochet was literally saving her life but she was not in a position to continue blogging but hoped to return 'sporadically'.  It was not meant to be as a couple of weeks later the depression took hold and her life ended.

Why do I write about her now?

She touched many lives in this blogging family we belong to and the strange thing is and I am sure you are aware yourself but when you follow a blog you are allowed into someone's life and we touch each other, initially as strangers but this online community grows and flourishes.  The week after she died many many of us all over the world wore flowers in our hair to remember her.  I thought it a
fitting tribute to wear flowers that our wonderful host of Five on Friday, Amy made for me.  It was a beautiful crochet flower brooch that I transformed for the day into a hair slide.  Flowers from one blogger to another worn in memory of a fellow blogger too.

Back to why I am writing about Wink today.  Again all over the world and we believe there are over 35 000 people (men and women) who are making a crochet blanket in her memory.  She was a highly skilled published crochet designer who was in the middle of completing her second crochet a long (CAL) for the Dutch yarn company Schjeepes.   After her death her family and friends along with the yarn company decided to finished the design of the CAL aided by her notes and what her friends thought she would like and 12 individual squares form the basis of a 48 square blanket, called Last Dance on the Beach.  There are three colour options each with their own special beach name: Last dance in the sea, Last dance in the rain and Last dance under the stars.  Despite having more on my plate than is healthy I could not resist joining in with this CAL and being a part of a community coming together to acknowledge that life is tough and some of us struggle on a day to day basis, but that there is hope and love out there.

A link to Wink's blog and where her sister updates the latest on the CAL and this week the feature of a Belgium newspaper writing all about the CAL:  A creative being


So my five today must be all about Wink's CAL:

Colours for the basic kit were as follows, I could not entertain the more expensive merino wool option as much as I was tempted... 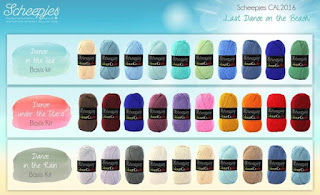 Each kit that is sold gives two Euros to the organisation  MIND, whose strap line is "We won't give up until everyone experiencing a mental health problem gets both support and respect."

For more information about the kits available:  Last Dance on the Beach

Eagerly awaiting the first week, we had to wait till the Wednesday and from here on in each Wednesday becomes a fizz of excitement to see what is in store for that week.  The new pattern is released on line,  the full written instructions how to make the square.  Each week four squares of the same pattern need to be made.  Ester, one of the designers from the CAL has also at great time consumption produced a video each week to show how to make the square.  I admit these have been a real god send as I may have struggled otherwise and her voice is so very soothing and calming.

Having used star stitch before I thought I would have no trouble in week 2, how wrong I was.  I had to keep frogging as I could not make the gauge correct and in the end had to increase hook size by 2 sizes.  I was not alone in needing to do this and eventually I was really thrilled with these four squares. 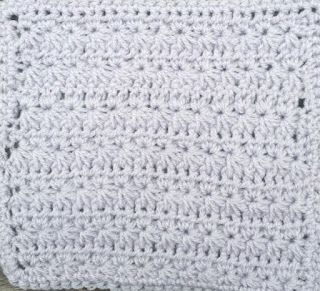 After the phaff of week 2, I confess to being a tad nervous for week 3, but I need not have worried.  The sun and waves on these squares proved to be fun to crochet and having not crocheted into front post for some time nor making what looks like cables made me feel I was learning as I was crocheting.   Loved this week. 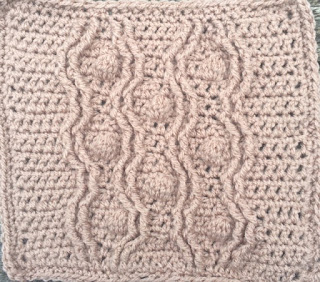 As with Week 2, this week has proved a bit of a challenge and some frogging and muttering has taken place, three are so far completed two days post being issued on line and I intend to complete the last one today.  My sizing leaves a little to be desired but as I have yet to block all the squares, I am hoping my mistakes will be erased away so to speak.


The four different designs so far: 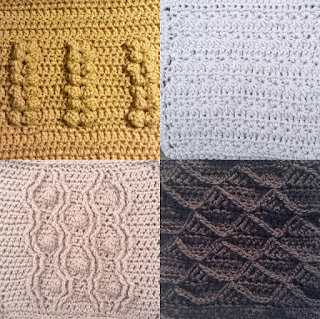 Hope you have enjoyed seeing my latest crochet and if you are tempted, it is never to late to join in, the patterns will stay up on the website and Ester's marvellous videos will be there to guide you.
Joining in with Amy sharing five moments from the CAL with you,
do pop over and see what others are sharing.
http://lovemademyhome.blogspot.co.uk/2016/05/five-on-friday_13.html?m=1
♥  Hoping that all is well with you   ♥
Posted by eclectichomelife