Drama on the high seas


Friday night saw John and I training down to the south coast to hook up with Brimble, our boat.  So far this year we have sailed her from the east coast of Scotland through the Caledonian canal, taken part in the Scottish Peaks Sailing and Running race, sailed across to Northern Ireland, over to the Isle of Man, into South Ireland and visited the oldest sailing club in the world in Dublin, sailed south to the Scilly Isles and then headed north to the south coast of the UK taking in Falmouth and Plymouth to name but a few coastal towns.  Now we were to pick her up from Eastbourne with the intent of managing to round the coast to near Ipswich on the east side, almost but not quite a circumnavigation of the UK in a season.   In theory we hoped this would be the last sail of the season as now the weather can turn and sailing can be hairy. Having  well over a hundred miles to cover with winds admittedly in the right direction for us but strong meant it was not a done deal that we would cover the distance and so we would have to find another weekend to move her if the task could not be completed.   Of course there are also those pesky tides to deal with too, get that wrong and you can actually be sailing backwards for 6 hours at a time!

Saturday's sail was fast and furious, we generally estimate to make between 3-5 knots, meaning we cover about 3-5 miles in an hour but with strong winds and tides in the right direction for most of the sail this trip saw us making up to 8 knots.  This was terrific news as then we could wave at Dover and the white cliffs, not needing to make landfall there and scoot on over to Ramsgate.  Perfect, it was looking like we might actually make it to the east coast this week end.  John decided as we were doing so well, we could also push the boat out (almost literally in this case) and take a cunning short cut so as to avoid the now turning tide which would slow our last bit of the sail down to possibly only 1 or 2 knots and sail on the inside of the sand banks that are notorious around Ramsgate.  My heart began to palpitate as I hate sailing anywhere where it is shallow, but there was a buoyed channel so it meant it was possible.

I cannot convey to you how wrong that was, according to the chart (sea map) we were supposed to have at least 2.3 m of water under us but as we 'bumped' hard twice on the sand beneath us, I can tell you the chart is wrong or the notorious sand banks had shifted, this can actually happen but then the bouyage is usually moved.  As we were the only idiots ones to be out at sea in October and to take the inside channel the buoys had not been moved, it's the end of the season after all.  Luck was however on our side and we did not get stuck, although it took a while for my heart to calm down.


This meant we had to back track the last two miles around the sand bank and still had another 3-4 miles to sail after that.  Taking the short cut had cost us about an extra two hour sail and against the tide!  After twelve and a half hours we made it into Ramsgate, not helped by the harbour master who helpfully added  when I called up on VHF  that we could moor up in any berth on E or F pontoon if we could see it, meaning it was dark and we were silly to be out there, thanks for that!

Having been a little unsettled in my tummy on the sail I was now ready for some good food ashore but not before we popped in to the rather salubrious Temple Yacht club founded in London originally in 1857 but later moved in 1885 to Ramsgate.

Paying the friendly harbour master our berthing fees, he told us that the forecast for the next day was for rough winds and that were we going to instead enjoy time ashore and not leave the next day.  'We don't like heros here, ' he said.  John mumbled something about the wind again being in the right direction and that our boat had sailed more miles than most in extremely strong winds that he was sure it would be fine.  [At this point maybe I should point out that John is very qualified both in academia of sailing  and in practice a sailor even winning Yachtsman of the year some years ago, presented by HRH Princess Anne, so he knows what he is about]

The wind did indeed pick up and was gusting a force 7, one below a gale, but the good ship lapped it up and the sail was great, not as fast as the day before but it was a brilliant day sailing.  We were not alone this time as there were another 2 sailing boats out at sea.  Sailing across the Thames estuary means there are no bolt holes once you leave Ramsgate, there is no where to to go and one just has to continue.  Turning round really was not an option on this day with such strong winds and with the tide against us had we turned, we literally would have been going backwards by a knot or two, so forward we had to go and enjoyed the sail until that was ...

At 9am my daughter rang in tears not able to get out of bed the pain was too excruciating in her back. This is not the type of call you want when at sea with no bolt hole to make landfall at.  It was also quite incredible that I had mobile reception at this point.  Being out at sea and more than 10 miles from land, it was quite by chance all reception was working.  Calling a village friend who was on stand by for the weekend at just after 9am, I sheepishly asked her if she could pop over and see what the situation was like, telling her that I may loose mobile signal and that whatever she needed to do she had my permission!!  Tense times on the boat in the high winds I can tell you.

It turns out they needed to call NHS direct, who did not like what they were hearing and sent a paramedic round immediately.  I cannot fault the NHS system, all was incredible by all accounts and the paramedic stayed at our house with Ella for over an hour.

To cut a long story short she was put on a meningitis watch as she had all bar two of the symptoms!  I just could not wait to get into land and home to my girl.

My husband has several forecast apps on his iPad and googles the weather constantly from about 10 days before we set sail and then daily until we depart.  We joke in our household that he searches until he finds one that he likes.  The forecasts really do vary that much!


Once safely ashore, John googled the Met Office off shore water weather page and found that there were severe wind weather warnings around much of the UK on Sunday.  We sailed from area 6 to 5, so all red warnings for us.  When asked why he looked now and not before we set sail on our 10 hour sailing journey, he replied that this particular forecast keeps most sailors in dock as they are nearly always scary.  John asked if at anytime I felt the boat or the conditions were unsafe and I had to admit that I did not, infact I thought the boat loved the conditions.  'There you are,' he said, 'that's why I don't bother with this forecast...' 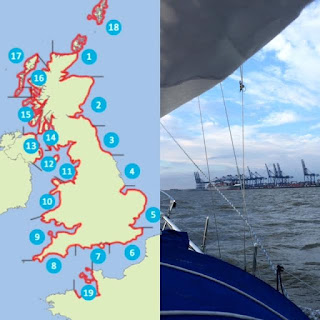 
So our season of sailing has come to an end and Brimble is now safely tucked up on the east coast, waiting for her major refurbishment.  She is going to be pampered and looked after and made safe to continue to be sailed hard for the next twenty or so years, she's not bad for an old girl of 44

As to Ella, she has not got the meningitis strain, we don't think, she was not allowed to travel to Italy with her Grandfather yesterday, doctor's orders and in fact Ella admitted that she is so wiped out that it would have been impossible.  Since Sunday she has spent most hours asleep in bed and not well. Today we have been told we still need to keep an eye on her and although she seems better, it could spike it's ugly head again.  I'm wishing her better all the time.


Joining in with    Amy  today, sharing my 5 moments from last week end,
do pop over and see what others are sharing.