London and a crocheted bag!

9th February
﻿﻿﻿ ﻿﻿﻿
Last week I spent a day and night in London and for a few precious hours had time in the city ALONE! It was such a treat and so I took myself off with my camera and trooped around a small section of this vast and amazing city.

﻿﻿﻿﻿I had decided in advance that I wanted to visit the British museum and pop into see what they had on the Aztecs, I don't know about you but I cannot take in too much information in one go and so always try to visit as few galleries in one day as possible, so thought just the Aztecs would be enough for one day!

Along the way I passed...

﻿﻿﻿
Looking down in the Bloomsbury quarter there was much to see... as well as spotting many blue plaque buildings, including one where Kenneth Williams used to live! 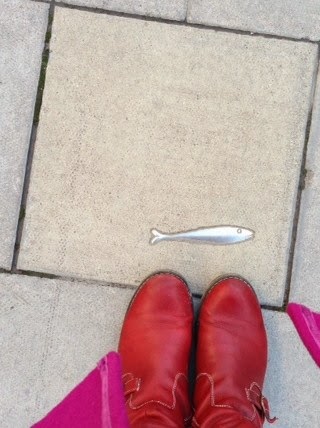 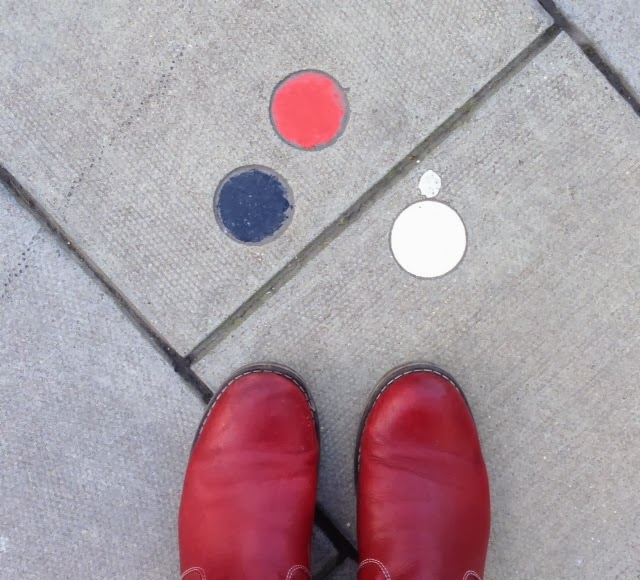 I had a beautiful surprise in Russell Square, where I was met by Spring... 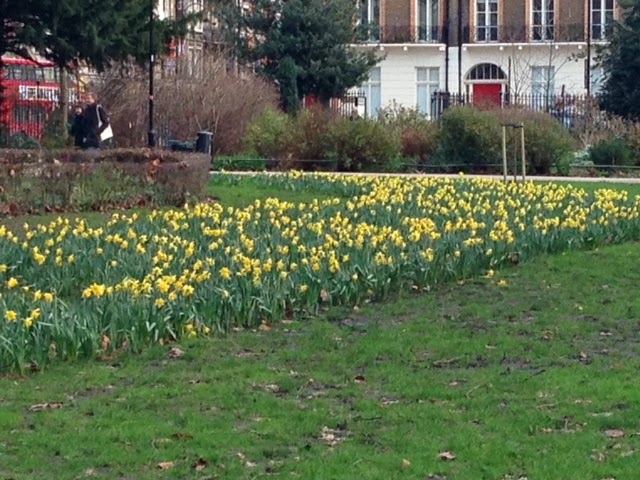 ...who would have thought with all this weather we have been having that in the first week of February there would be an abundance of daffodils.


The architecture in London is so varied and mixed up and next to each other but sometimes a building just stops you in your tracks...

Art deco at it's best, pristine white and green, just expect Poirot to walk out to complete the picture! 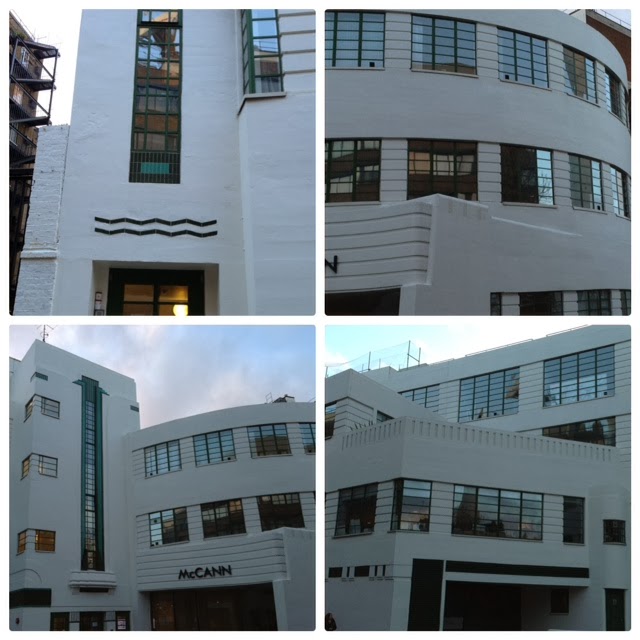 Such intricate detail to the lighting for a tube station, how many people do not even notice? 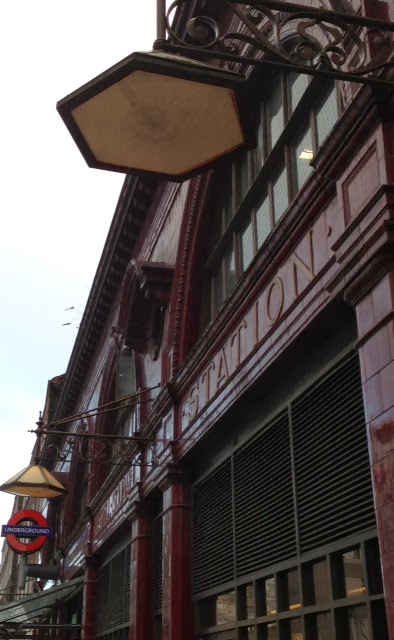 I loved the lines and patterns found on this building: 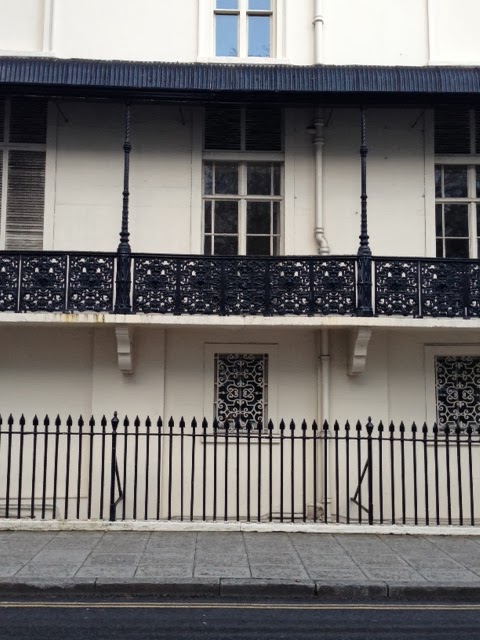 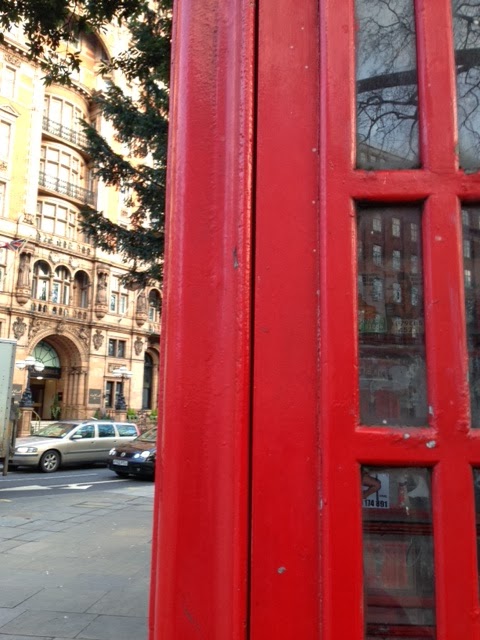 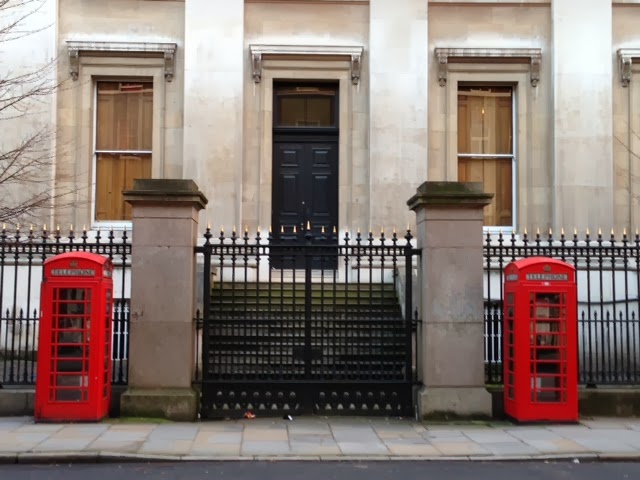 And finally I made it to the British Museum, but couldn't resist taking a picture of all the railings outside.  Did you know that railings were traditionally all painted green in Victorian times, but when the Prince Consort, Prince Albert died, Queen Victoria demanded all railings be painted black to remind Londoners that the country was in mourning, and so the majority of railings in London today are still black.  Our own Queen Elizabeth had a similar demand on London and when her mother died, aged 101, the same number of London phone boxes were changed colour from the pillar box red to black.  There are still 101 black painted phone boxes around London to this day. 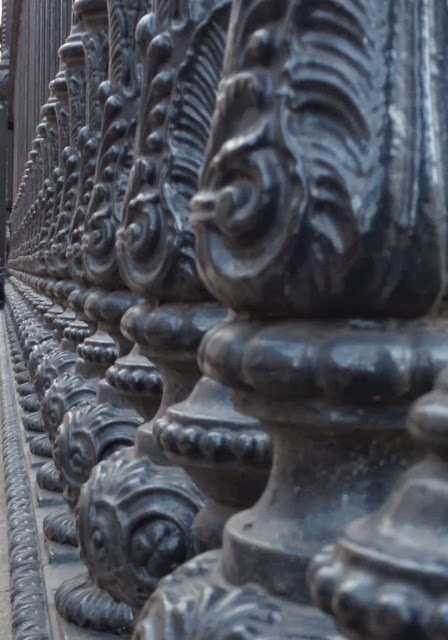 I love the British museum as I do many others in London and am delighted that they are still free to visit, such a rich amount of learning and experiencing to be had for nothing.  In recent years the museum has undergone major transformation and I think they have made a sterling job of mixing the old with the new, just look at the roof now... 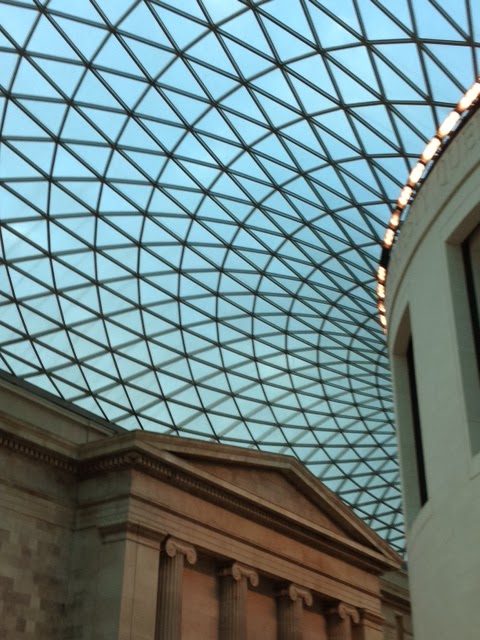 Even detail to the windows within the building, look at the reflection from the museum's roof on the glass window. 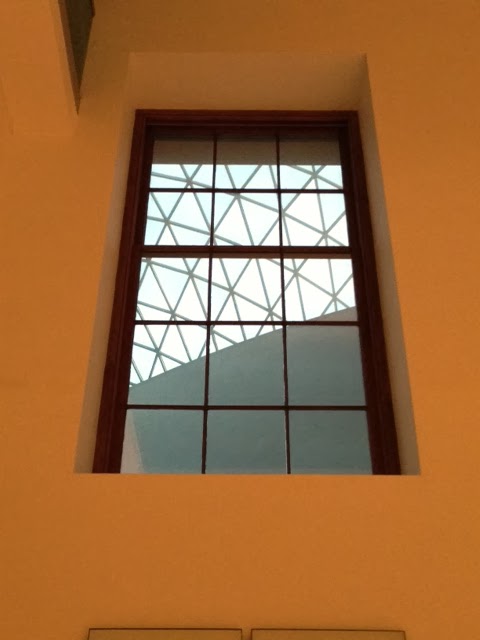 I finally made it to the Aztec section and have to be honest was a little disappointed, as there was very little, but I managed to find a fertility goddess that they prayed too back in the 1300's and discovered that turquoise was the second most valued commodity they had to trade with. 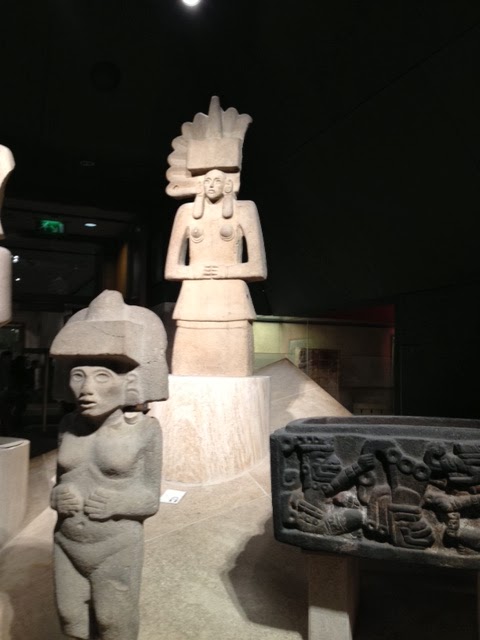 Look at the detail of the mosaic, all turquoise too. 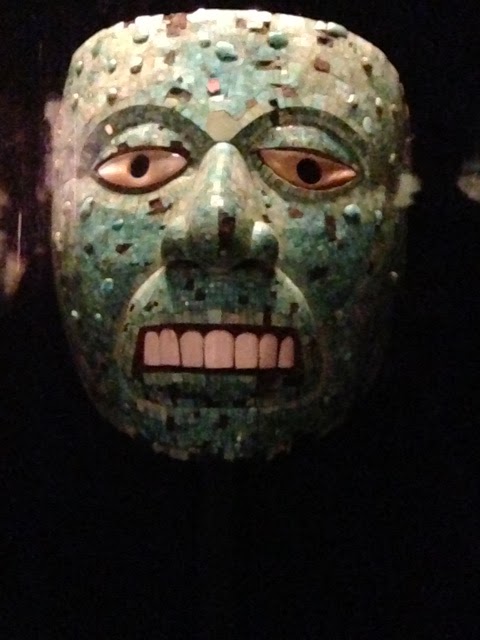 It was finally time to leave and head back to begin beautifying myself for my long standing dinner date, the reason we were in London, but couldn't resist a couple of more photographs on the way back...  Loved the reflection in the lamp. 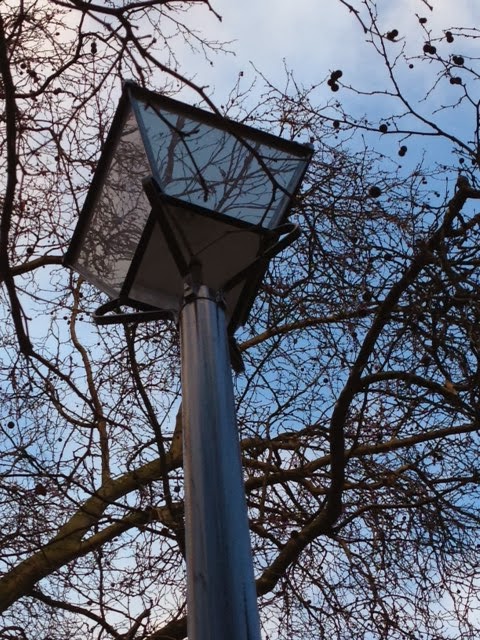 Such a grand building. 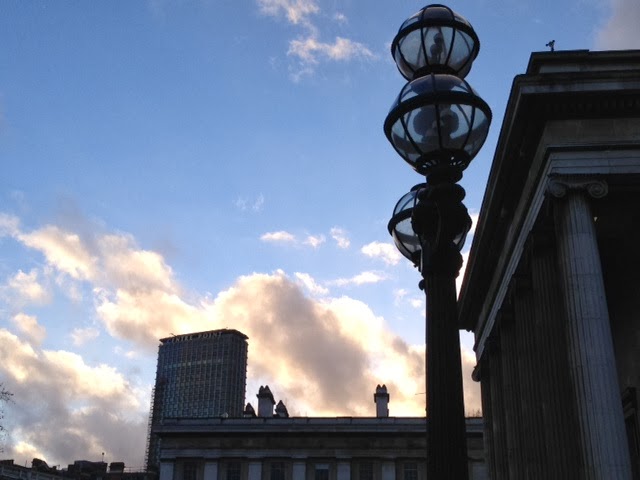 Ready to leave to meet everyone for dinner I realised I did not have my bag with me, under normal circumstances this would not bother me, Mr H is very good at carrying my paraphernalia, but I had especially crocheted a little clutch bag for the evening and could not believe I had left it at home!  As it turned out, it was a good thing, as Mr H thought it would be great fun if, instead of hailing a black cab, we would Boris Bike it to the restaurant instead!  So in my high heels, newly hair dressered hair (!) I pulled on a knitted hat and off we pedalled!  London traffic is a little scary, especially along the Shaftesbury Road, but we managed it and afterwards it felt good!  We decided we would bike it back too!

The clutch bag that I forgot to bring! 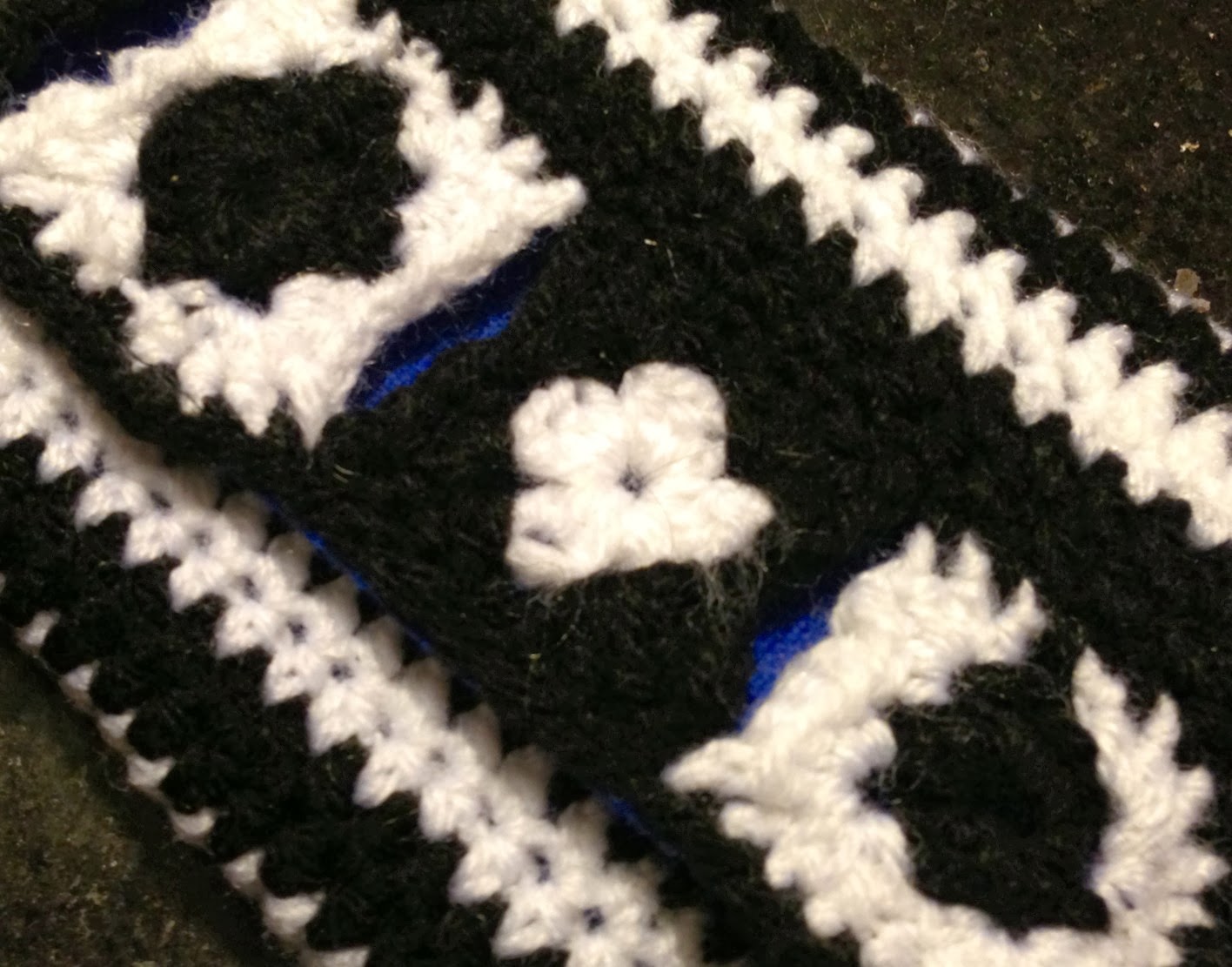 Boris bikes, a great scheme, meant to be for everyone in London.  A survey conducted a couple of years ago, found that the majority of users were middle aged men who earned in excess of 150k!?!?!? 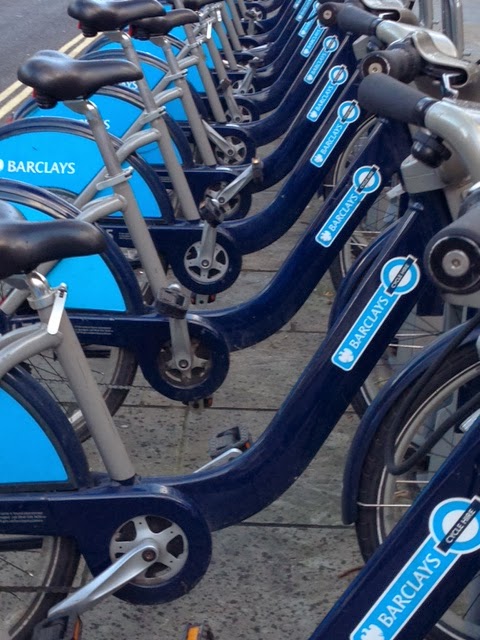 Dinner was good and the company better, a great time was had by all. I remembered to photograph my starter as I particularly enjoyed it and them promptly took no more pictures.  The hoi sin duck roll was delicious though and well presented. 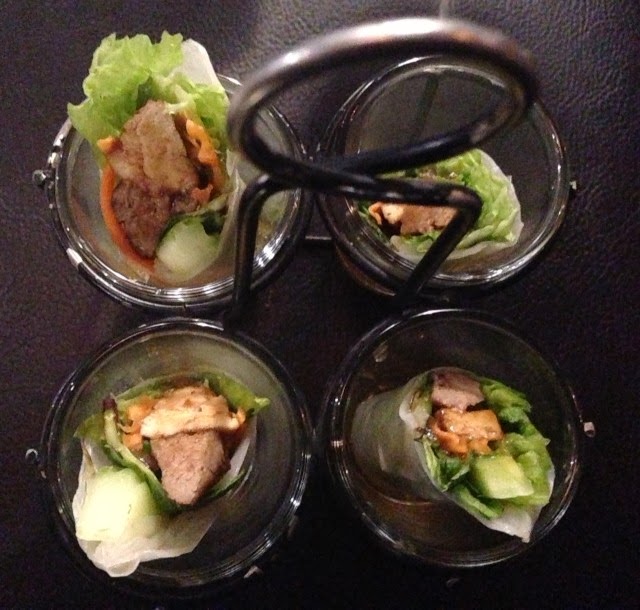 Needless to say after a few jovial drinks with old school friends and their partners, our good intentions of cycling home faded away and we hailed a good old London cab!
♥I love visiting London, have you been?  What do you like to do?♥﻿
Posted by eclectichomelife